The nose is yellow at the front and sides, and black on top.

I'm soon thinking that I might have been wiser to paint this area before the blue sides, as these areas are flat and could have been masked off while I painted the sides afterwards.

Another thing I might have done earlier, is to make sure the flat areas really are flat with no excess resin. 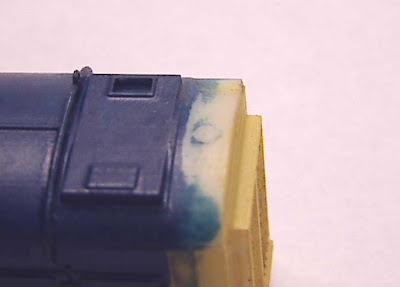 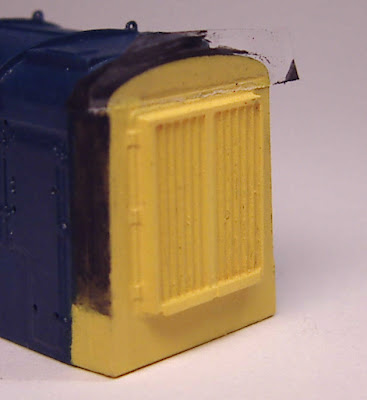 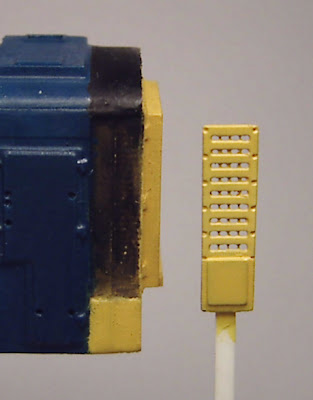 I want the area behind the grille to be more of a dirty brown than this, but I'll experiment with watercolour or weathering powder after I've varnished this.

After the time I've spent trying to get clean lines here it's disappointing to see the "close-ups". Having an unsteady hand, I suppose painting was never going to be my area of expertise. Now I need to be careful not to make things worse with the tricky-looking wasp-stripes.

This has taken far longer than I would have hoped, as past mistakes come haunting back.

I'd folded the cab inside-out then had to correct it. I'd strengthened the corners with epoxy for simplicity but part-way through painting one of the corners came apart. I decided to solder the joint this time, giving much greater strength but meaning I had to strip the paint and start again.

Part-way through painting and the same thing happened to the other epoxied joint, so this is now my third attempt. At least the cab feels stronger now, and I've learned a lesson about trying to cut (epoxy?) corners.

I'm using Railmatch 202 yellow, described as matching the yellow used from 1984 onwards, and it looks pretty much like photos of my prototype from the 1980's.

I'd got some "low tack" masking tape from Phoenix. 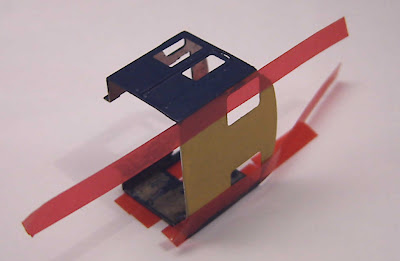 Using the tape to protect the finished side.

In the end I found I got a cleaner effect at the edges from clear sticky tape. 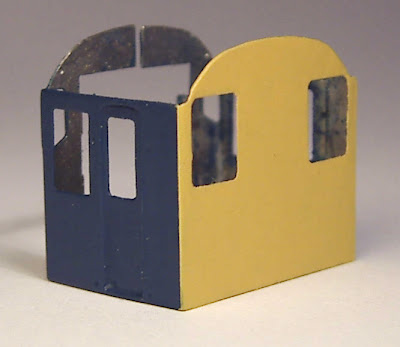 Hmm... suppose I should paint the inside too. 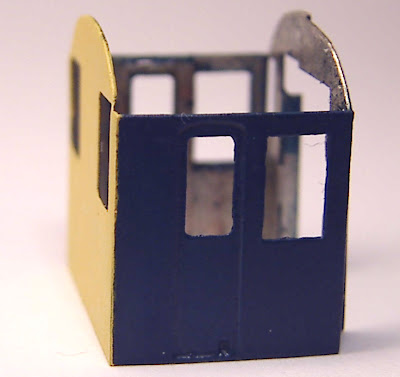 But these are minor details. I was concerned about getting clean lines where yellow meets blue, and (enlarged images aside) I feel I've achieved that.