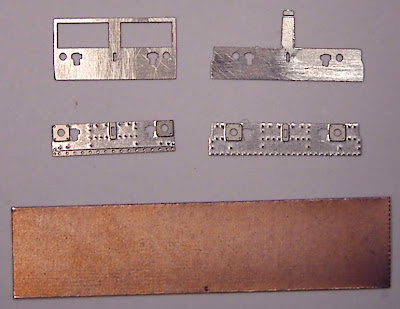 The overlays are soldered onto the bufferbeams on one side

and PCB soldered onto the other side then filed to fit.

Using PCB means that the bufferbeam insides are electrically isolated from the beams on the outside.

These gaps ensure that the sideframes can be joined to the ends of the bufferbeams without being electrically connected.

A fraction of the copper coating has been filed from the bottom of the PCB to ensure isolation during a later phase of construction. 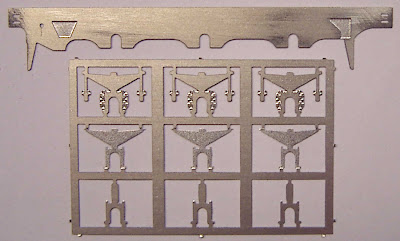 These are provided ready-spaced, so layers can be built up while still on the fret.

First layer soldered onto the outside frame.

I use solder paint between the layers. With everything aligned, a soldering iron pressed on top of the layer makes the joint firm.

Any excess solder is removed with a glass-fibre brush.

Getting the motor working

I know the motor runs on its own, and I know the gears turn - now I have to get them working together.

Optimistically I start the motor with all 6 axles in place. Not a flicker. Turn the power up a little... still nothing.
I'll have to take this slowly. Removing the wheel axles leaves just the worm and worm wheel in contact. The motor turns hesitantly in one direction then stops, still nothing in the other direction. With the power on low, I help the motor through the sticky patches by pulling one side of the worm down with pressure from a pair of tweezers. Soon it's turning under its own power. Still not smooth, but a start. 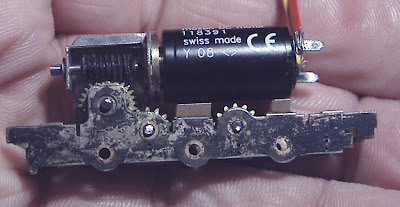 But the other direction is trickier. With the power off I try to turn the worm. It's very stiff in places but I manage to get it round. After about an hour, it's running both ways on its own. I'm hopeful that some "running in" will resolve the stickiness without me having to check the components.

At least when I add the 3 wheel muffs (still on makeshift axles) it all runs reasonably well, but still not smoothly.

Eventually decide to check the worm wheel axle. On close inspection there is some friction between the muff and axle bearing. I take it out, file the end of the muff and
glass-fibre brush the axle bearings. Do this a few times, with improvement each time. Perhaps that was the problem all along.

Some lubricating oil on the worm wheel also helped. As did unscrewing the motor a quarter-turn from its bearing, but now the motor had to be aligned accurately. I would need to take care when securing the motor to the frame spacer underneath. 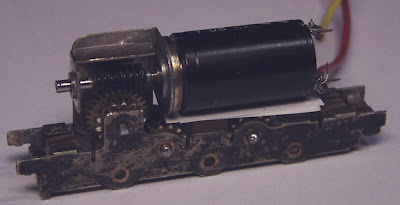 Using strips of card and paper, I find that the worm wheel turns fastest with 0.4mm support. Stick this onto the spacers with double-sided tape as a temporary measure.

I don't want to add the wheels and coupling rods until I've got the gears moving as well as possible, so meanwhile I'm going to start on the underframe.

The stub axles support the worm wheel and spur gears. To remain clear of the body they can only extend about 1mm outside the chassis side.

I feel that I'd like to be able to remove the axles should the need arise. By making them from axle steel and running a 1.5mm drill bit through the muff, they should be a loose fit.

Then with the muff in the chassis, I feed a 1.3mm drill bit through, then feed in the 2 stub axles, separated for electrical isolation by a slice of styrene. 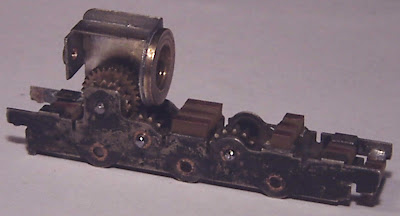 Others make stub axles from old 1.5mm drill shanks. I can see that this would be smoother than axle steel, perhaps worth trying at some point.

First test fitting of the motor and mount.

Turning the worm with a pair of tweezers, at first I think it's not working, then realise the worm wheel is moving really slowly.

The precise angle of the motor doesn't seem to affect the running. I want the worm wheel to make contact with the middle of the worm, so I glue the shaft on (Araldite) leaving it about a millimetre short of the motor. This also means I can be sure no glue gets into the motor.

Next solder the mount to the chassis. Takes me quite some time to get it flat against the chassis side, and once done I find it tilts the motor slightly upwards.

I know there's little clearance under the resin body, so I decide to do it again, this time using crocodile clips to clamp everything in place. 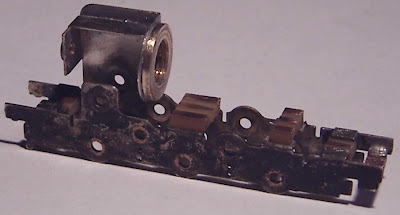 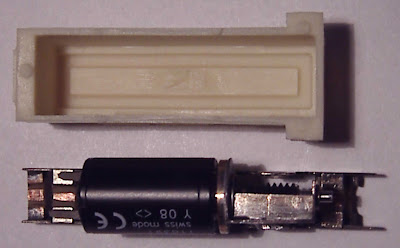 The resin body is a tight fit over the motor. I've made sure the motor is central over the chassis, but I still need to file a little off the end of the motor shaft before the body will fit over it.

And finally, testing with power to the motor terminals - it runs smoothly and slowly in both directions. Feel my efforts have been rewarded.

The kit is designed for 2 different motors. I've got the Maxon (similar to Faulhaber) coreless motor as it was offered with the kit. 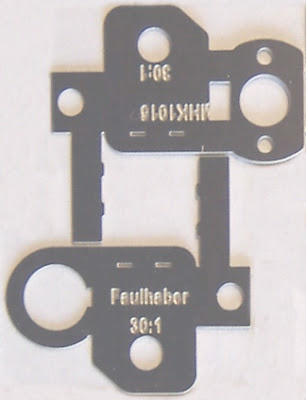 In years past I enjoyed taking my N gauge locos apart and watching the motor with the wires on the core spinning around between the magnets. As I understand it, a coreless motor has a magnet in the centre and a coil of wire spins around it. I'd like to open it up and have a look, but at £30 a time I can't really afford it. The ones I've seen in action appear to be beautiful slow runners - perfect for a shunter.

The bearings support the motor at one end and the shaft at the other. 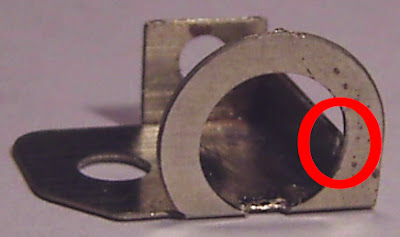 Although I’ve soldered the low side with the tabs in the slots, it obstructs the hole. A little work with a semi-circular file and I'm ready to solder the bearings. 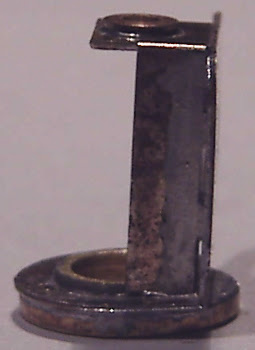 First attempt - the motor bearing isn't flat against the mount, and the joint has started to come apart.

I fold the end down, file away some of the side, correct the soldering and fold back up. 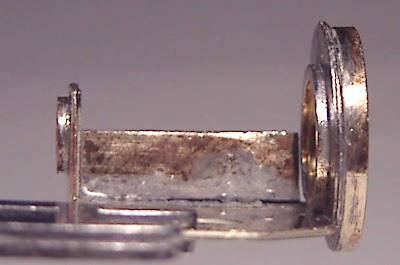 This looks better. I've probably weakened the structure by filing the end, but it should be easier to align the motor and shaft on the chassis.

Brakes - fixing rigging to the shoes

As soon as I cut the rigging from the fret I realise that I should have opened the holes first. It's too flimsy to hold now so I clamp it and use the broach.

Next thing is to lay the rigging over the shoes. The instructions recommend using a piece of thin card to prevent the rigging fouling the wheels, but how thin should it be?
From photos of the prototype the clearance looks negligible but my model's axles will have some sideways movement so I'd better make enough allowance.

Decide it's time to do some calculations to understand exactly what I'm doing.
A member of the 2mm Scale Association has kindly pointed me to a diagram in our Yearbook which shows that the back-to-back (the distance between the insides of 2 wheels on an axle) should be 8.5mm. The total width of the chassis is 7.6mm, so there will be 0.9mm of space between wheels and chassis. So when I put the wheels on I'll need to make sure that there's 0.45mm space on each side.

I put the wheel axles muffs in the chassis and find the greatest movement is about 0.5mm.

So I'll also need to make sure that the muff is central along the axle, giving 0.25mm play either way. If I do that no wheel should ever be more than 0.7mm from the chassis.

Now I can see how this looks.

The shoes and rigging are held in place with wires in some balsa wood, as suggested in the instructions. This took me some time - must treat myself to a proper magnifier soon.

I’ve added some pieces of 0.7mm plastic strip under the wheels to represent the extreme of the wheel movement. The wheels still move freely, and I can see exactly how much clearance is needed.

Turns out some 0.3mm card fits very well, except for the central shoe that seems a bit wider. So removing the strips I use a sliver of card over the two end shoes, keeping the rigging flat with gentle pressure using a small brass rod while I'm soldering.

I tried to use as little solder as possible, but this backfired when I lifted the rigging off and one of the shoes fell off immediately. I re-do them all with a generous blob of solder.

Can't think of a good way to cut the wires really close to the rigging, so I just file them back slowly. 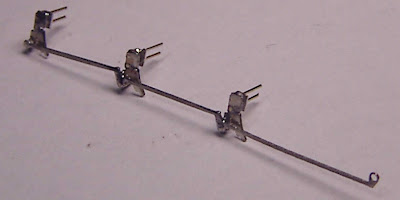 Feel that I’ve taken a long route to get here, but at least it looks reasonably good, and I’ve started to tackle some questions about the wheels and muffs.

Looks like this is where it starts to get fiddly. The brake shoes are held onto the rigging with pieces of wire. The whole thing hangs on the chassis, with the shoes around the wheels. Fortunately the rigging will be removable.

brake shoes (3 for each side)

I open out the holes in the shoes with a broach then test with 0.3mm brass wire before cutting the shoes from the fret. 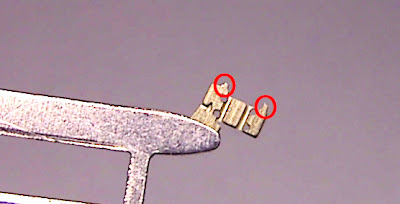 I try to cut close to the shoe, but there’s always some trimming to do with etched kits.

There are 3 small holes marked out in front of each axle. The lower 2 need to be drilled through to carry the shoes. Find that my newly-purchased 0.3mm drill bit is too small for my minidrill, so I use the tip of a larger broach till it breaks through, then open the holes out with a small broach till they’ll take the brass wire.

Suddenly notice that one of the shoes has gone missing, so I’m delighted to find that there are some spares on the fret. 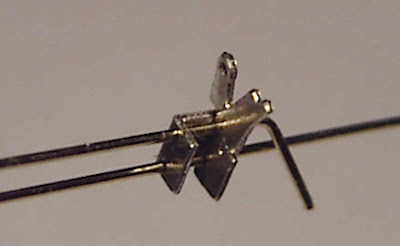 Wires ready to be soldered to the shoe. 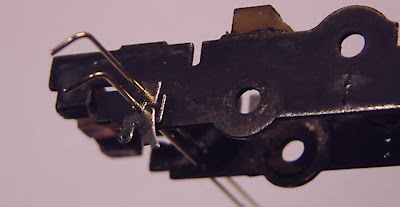 I've made both wires long enough to go right through the chassis, but they'll be cut back eventually. 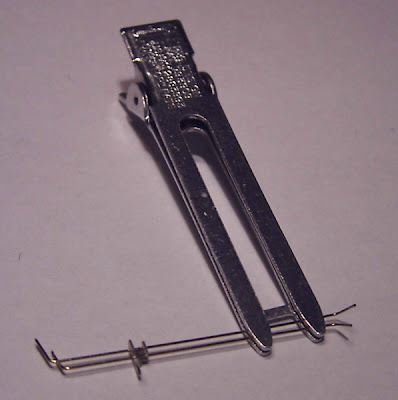 A clamp holds the wires parallel while they’re soldered to the shoe. 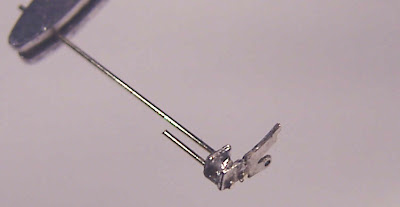 Just a blob of solder inside the shoe. I need to keep one wire long to help fix to the rigging. Now to try the shoes in place around the wheels

I find that there's slight contact, so I need to file the back of the shoe just a fraction.

Now the wheels turn freely, I can worry about the rigging.