The steps seem to vary on the prototype. Some have a very defined "L" shape, others look much flatter. So far as I can tell my prototype had a pronounced L-shaped rung at the bottom and two flat steps. 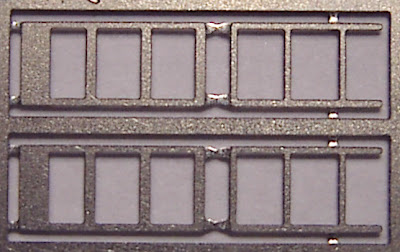 Note that the rungs are thicker on the left side. Folding this etch results in a set of very slightly L-shaped steps.

So I can't really use these. Think I may have to make some steps from scratch in styrene sheet, but decide to try a bit of butchery first. Separating the parts, I cut out the larger central steps and file the inside smooth. 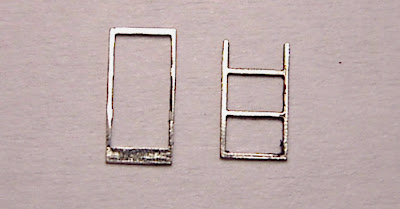 With a little filed off the thick end, these will now go together the other way around.

Much closer to my prototype. Now I've only got a thin strip at the top to attach to the footplate, but this could work out well.

There is a potential problem fitting these steps, in that they could connect the metal overlay on top of the footplate with some part of the underside. This thin strip now won't make electrical contact with the footplate.

I've filed a gap in the footplate deep enough that the steps should lie flush with it (next time I'll do this before fitting the tanks). 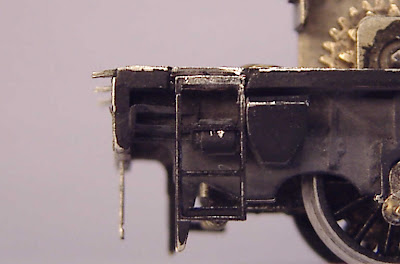 top of the steps not touching the metal overlay.

Now I can use epoxy to carefully fill the gap. 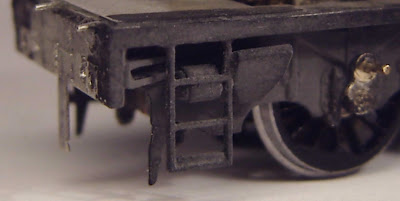 Cruel in close-up, but reasonably pleasing I think from usual viewing distance. 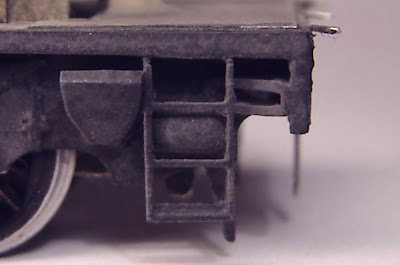 Painting the wheels and sideframes

Well, I haven't been looking forward to this (as I said), but I really need to paint the sides before I fix the steps.

My blackened chassis has got quite a lot of shiny metal showing through now. I think it'll be OK to leave it like that, but perhaps this means blackening isn't the way to go for the more visible areas.

I still like the Humbrol black I used earlier so I start with that on the wheels.

I've heard that these soft metal wheels are susceptible to rust so I polish the tyres and rims with wet-and-dry paper, grades 500 then 1000 and 1200.

Same colour on the sideframes, well thinned at first.

With a second coat and dry brushed with grey weathering powder it's looking better.

Already I can see some shiny metal showing through on the left axle-box. It's one of those things that always distracts me on a model, but that's going to happen where there are moving parts, I suppose. Wonder if you can get ready-coloured metals...?

The bright unpainted rims look very obvious here, but reluctantly I'm leaving them. If I find that the wheels don't need much cleaning once in use, I can revisit this.

The extension at each end of the sideframes is the guard iron ("life guard").

From photographs they appear to bend inwards then back to approximately vertical.

The tip should finish directly above the rail.

Posted by Gram at 5:01 am No comments: Links to this post 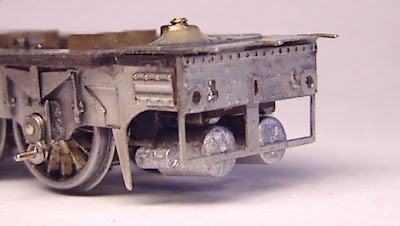 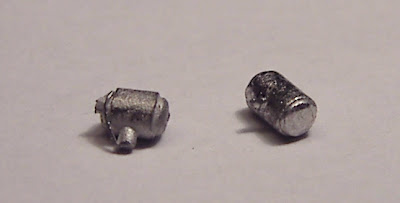