The underframe of the loco will obviously have to be a dirty oily colour when it’s done. I’m hoping I can get away without painting a lot of small delicate parts if I blacken them first.

I don’t think much of the chassis will eventually be visible, so this would be a good place to see how well it works.

I bought some Birchwood Casey Liquid Blue once, planning to reduce the shine on the top of my rails. Haven't got round to that yet, but have used it for chemical blackening. It’s strong stuff (used on rifle barrels, apparently), and needs to be washed off in water as soon as the required colour is reached. I paint a little on a spare part of etch, and it starts to colour after a few seconds.

They give instructions on how to prepare the surface with some products I don't have, so I use liquid flux and wash off after a minute or so. 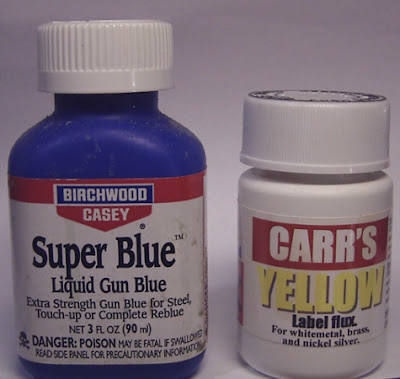 the chassis prepared with flux

I'd say this was a good colour, but there were a few stubborn bits refusing to blacken.

Now with a small dab of lubricating oil smeared over.

This looks quite promising, but the black layer can come off. I'll leave one side oil-free and see how it looks after being handled for a couple of weeks.

When I read the instructions for this kit and found that there were several ways of putting the gears together my first thought was that I’d go for the simplest layout. But this would mean two of the axles being driven by the coupling rods, and since I’ve had problems with this before (my Farish conversion), I’m coming round to the idea of driving all the axles via gears. 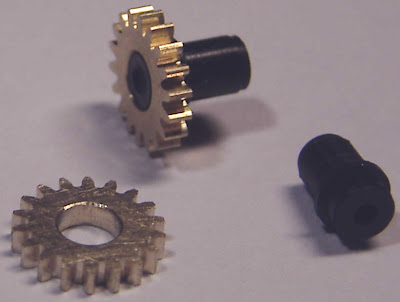 The 18 tooth gears with muffs
The muffs turned out to vary in length from 5.95mm to 6.11mm. I decided to use the shortest one for the worm wheel, as by filing the inside of the corresponding axle bearings I could make the muff a perfect fit. 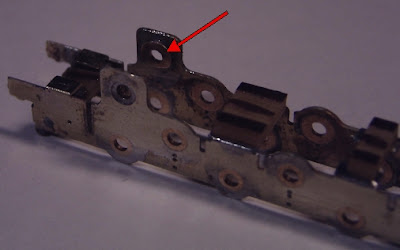 Worm wheel bearing
Wondering what effect this difference in lengths will make when the muffs are in place. Perhaps I should get some small washers to act as equalisers for the shorter muffs.
The gears can be pushed onto the muffs, but the hole through the muff is (deliberately) too small for the axles, and needs to be opened out until the axle will slide in tightly.
I want to put the gear wheels together on the chassis to check that it all runs freely, but I’m feeling a bit nervous - If I don’t open the holes enough it’ll be difficult to remove the axles. But if I open the holes too much the muffs may rotate on the axles.
Some smaller, say 1.4mm axle steel would be ideal to try the gears in the first place. I can’t find any rod of that size, but 1mm square rod should serve the same purpose.
Putting the gears in and spinning them round, I find they move smoothly in one direction, but get stuck going the opposite way. Trying the gears one by one, turns out one gear is brushing against the underside of the spacer tab. Think it may be because I’m using thin rod which allows more movement, but find the same thing with the axle steel.
I gently file around the outside of the gear teeth and also reduce the underside of the brass tab. Needed to remove quite a bit before the gearwheel turns freely. 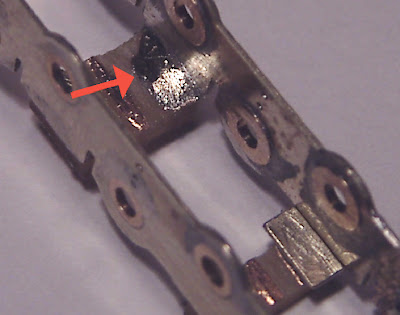 Now the whole mechanism turns smoothly. Very satisfying.
[I subsequently decided that I must have bent the tab by more than a right-angle, so that it was below the intended level and hence interfered with the gearwheel. Would have been much easier to remedy if I'd checked before soldering the spacer on.]

This shows how the shorter muffs can move along the axle, meaning the gears slop around a bit. Not enough to disengage, but a couple of slices of the right diameter plastic tube would fill those gaps neatly.

An alternative gear arrangement, in response to a possible difficulty with attaching the brake rigging.

I was concerned that wires coming through the chassis may interfere with the gears, but apparently that won't be a problem.

Preparing the wheels and gears

Need to check the gears and wheels before they’re in place. 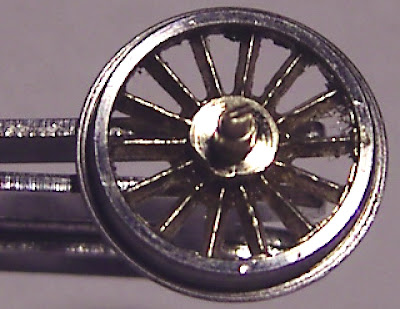 Under a magnifying glass it’s easy to see the small imperfections on the face of the rim and between the axles. 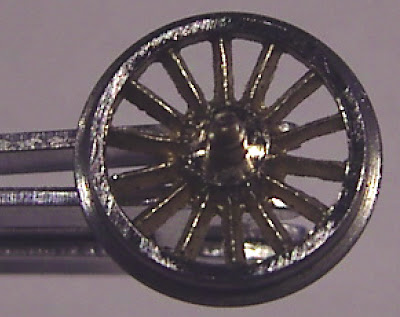 Well, I stroked a fine (no 4) file gently acrtoss the face of the wheel to rub down the small “blobs”, and cleaned between the spokes with a small cutting broach. It looked good under the magnifying glass, but the enlarged photo shows how rough it's left the wheel rim. 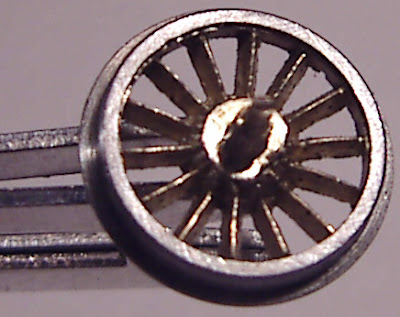 Rubbing with wet and dry paper (I had some P500 handy) restores the finish.

Digital close-up photographs can be cruel - now I have to rub down the other wheels and photograph them till they all look smooth.

The gear wheels looked pretty good. No imperfections that I could see, and nothing trapped between the teeth.