First to add some more weight.
There's room behind the nose, and scraping away some of the excess resin under the roof allowed me to add some 1mm thick lead offcuts there. 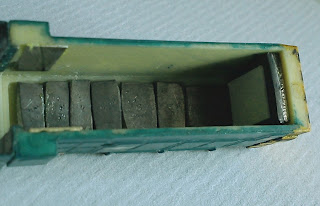 I've used all-purpose adhesive to fix the lead. It seems to hold well but could be removed if necessary. The paper glued to the front weight is to stop any short-circuiting if the weight falls away and onto the motor terminals. The small pieces of brass on each side are not for weight, they're to stop the short half-axles falling out (as happened during testing).
There's also plenty of room in the lower part of the cab. I want to be able to see what I'm doing when I fix the cab to the footplate, so I'll add some weight there later.
Next using epoxy I joined cab to bonnet on a flat surface. Then I fixed this to the footplate while it was secured to the chassis. I don't think I should have done it that way. I haven't liked the look of the cab ever since I bent it inside out by mistake. Even so, I think I could have got it more square looking if I'd fixed the cab to the footplate first (as suggested in the instructions).
And this step produced a notable improvement in performance. Without the bonnet, the motor would rotate a few degrees one way then the other as it changed direction, and this could cause it to stall moving into reverse. Now that the bonnet holds the motor tightly in place, good behaviour in both directions.
Posted by Gram at 9:00 pm