Pipework under back buffers

There is a thin pipe that runs underneath and parallel to the back bufferbeam. It's secured under the left buffer by some pipework like this 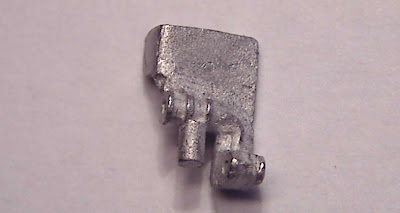 This casting lies between the inside and outside frames. The kit designer has suggested that it can be fitted in conjunction with the cylinders under the back bufferbeam, but my prototype doesn't have those cylinders.

I can't fit this as it stands, partly because of a blob of epoxy securing the left buffer and partly because I'd like it to be further left than it would naturally sit.

I've filed a lot off the left side and a little off the top so hopefully I can fit it to correspond with my photographs. I've also drilled a 0.3mm hole through the lowest part for the thin pipe.

The pipe bends upwards at both ends, so I'm making it in 2 parts. I've estimated the shape of the bend from photographs (approx one-third of the bufferbeam height).

I've fixed the casting onto the front of the chassis and glued wires into both ends of the hole.