The buffers supplied have shanks that extend through the bufferbeam next to the sideframes, and once again care is required to avoid contact.

They have an intermediate cylinder which doesn't seem to match the prototypes I've looked at. They also have a square endplate, although there is already a nice plate on the bufferbeams with the four corner bolts represented.

I can adapt them to an extent. 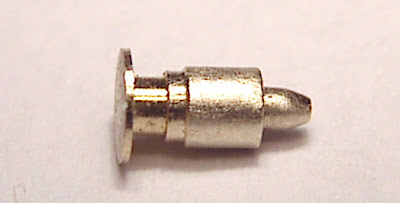 I've rounded the shanks to keep them clear of the inside of the frames. And by filing the square plate to a circular profile I can use the bufferbeam plate as intended. Still got that extra cylinder though - I could try a bit of butchery, but suspect I'd probably do more harm than good.