The chassis is held to the main body with screws at each end.

I've already fitted the nuts on the outside frame assembly, now I assume I have to drill holes through the chassis to fix the pieces together.

I hadn't been thinking about that when I filled the areas in question with lead shot recently, so I have to remove most of it to drill the holes.

With the frame fitted onto the chassis I start by drilling through the nut from above, gradually increase the drill size, hoping this way to get the holes in exactly the right place. They have to be increased to about 1.3mm to comfortably fit the 12BA screws.

The first one ended up nearer one side, so I had to "move" the hole to the right by reaming with pressure on that side. Although the chassis now runs, it looks from the photo as though I'm not quite central yet.

I do better on the second hole.

Now I find I've introduced a short-circuit. Turns out, when the screws are tightened, they push the PCB underneath the body assembly against the tabs on the top of the chassis. 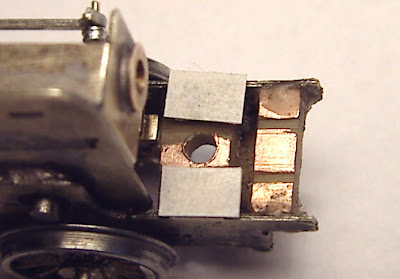 I probably don't need the screws absolutely tight, but as a precaution I put some sticky tape over the tabs.

Finally I need to cut back one of the screws to keep it clear of the motor. I use a tip that I picked up from my 2mm colleagues recently.

I wound 2 nuts onto the screw before cutting it with pliers. 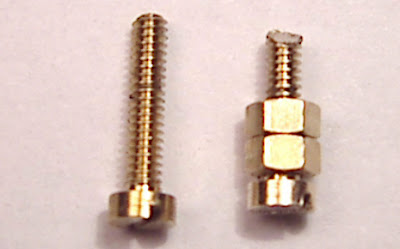 Once the rough end is filed off, the nuts preserve the thread as they are removed. 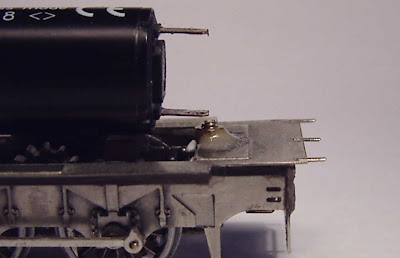